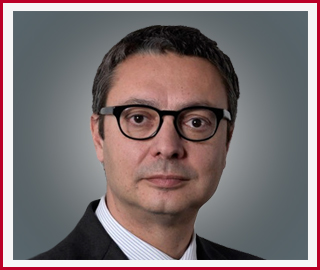 Pasquale Di Bartolomeo was appointed Managing Director of MBDA Italia in October 2016. He is also Executive Group Director Sales & Business Development since 1st January 2018, having previously been Executive Group Director Strategy, a position he had held since joining the company in September 2011. He is also member of the board of various MBDA companies and subsidiaries such as Bayern-Chemie, MBDA Inc. and Roxel.

Prior to joining MBDA, Pasquale spent his career in positions of increasing importance within the Finmeccanica group (now Leonardo). He was Head of Strategic Planning and Business Planning from 2005 to 2011, when he was involved in several M&A campaigns. From 2003 to 2005 he was a Senior Manager in the Transportation Department, after having worked for two years in the Strategic Financial Projects Department, with responsibilities on M&A, Business Development, Investor Relations and Capital Market. Previously he had worked for four years in the USA in Ansaldo – Finmeccanica, a company he joined in 1995 after graduating from the University of Rome with a Masters degree in Economics, and where he worked first in Marketing Analysis and Business development, eventually becoming Director of Strategic Marketing and Communications.