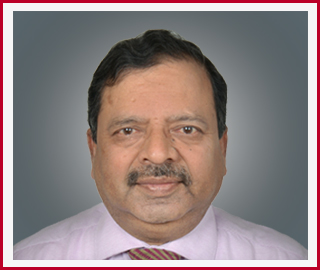 Cmde Bhargava graduated in Electrical Engg from the country’s premiere Engineering institute IIT, Roorkee in 1976. As a technical officer in the Navy, he has held various leadership appointments on board frontline Warships, Submarines, Naval Dockyards, Staff and Submarine Design Directorate at Integrated HQs, Min. of Defense (Navy). He had put in 31 years of distinguished and unmatched active military service dedicated to the country.

After accepting the call from L&T to join the Corporate, he was assigned with the crucial responsibilities to re-vitalise International Business Development. As a pioneer, he has many firsts to his credit, which includes Joint Venture with industry giant, CASSIDIAN (Airbus Group), Germany. He relentlessly drove the L&T initiatives beyond borders and facilitated Defence & Aerospace businesses to accomplish new heights. He steered multiple strategic partnerships with global OEMs for Artillery Systems, Defence Electronics, Missile Systems, UAVs & Military Communications. He provided a new direction to the newly formed Flight Systems BU and within two years the revenue and profit grew multifold, gaining new businesses as well as ensuring production ramp up meeting the stringent Quality, Cost and Time demands. He inspired and led the remotely located PMF at Coimbatore to almost triple the output without any additional investments. He has led partnerships with ISRO and VSSC for supplying Mission Critical Systems for PSLV, GSLV, Moon Mission-Chandrayan, Mars Orbital Mission–Mangalyam, Hypersonic Wind Tunnel System, Satellite Communication and Tracking System which have created International bench marks in the field of space technology. He is presently heading the Submarine & Under-water Platforms Business Unit as Vice President, L&T, Defence.

During his active service in Navy, he was recognised as technocrat leader and led multiple initiatives to enhance indigenisation and self reliance. As a pioneering effort, he led the Submarine Design Group at the Naval HQ for Weapons, Electrical and Control Systems with distinction for 10 years and developed the Design of first Indigenous Nuclear Submarine. He pioneered the design, development, testing and commissioning of the remotely operated Under Water Launch Platform (UWLP) Control System for testing indigenously developed Underwater Launch Missile, using the Fiber Optic cable, establishing new technological bench marks for control systems technology in the Navy.

He has presented papers at numerous national & international seminars, is a respected expert & speaker on defence procurement policy, exports, PPP & offsets related issues. He was invited by Israel, Ministry of Defence twice to address Israeli Industry on Defence Procurement and Offsets (2014 & 2015).

He strives to continuously upgrade his professional skills and knowledge, through continuous structured and unstructured learning. He is an alumnus from the prestigious Naval Academy for Strategic Forces, Vladivostok, (Russia); Defense Services Staff College, Wellington and College of Defence Management, Secunderabad and has graduated with outstanding grades at all these premier Defense Management and Strategic Studies Institutes. He has been identified as potential top level leader in L&T and has been provided with opportunity to fine tune strategic and business skills under guidance of faculties from IIM, Ahmedabad and Harvard Business School, USA.

He is Chairman of the National Defence Sub-Committee on Marine Systems & Shipbuilding at Confederation of Indian Industries (CII), Member of the National Defence Committee of Federation of Indian Chambers of Commerce and Industries (FICCI) & Convenor, CII Defence Committee (Western Region). He is a co-opted member of MOD Committees for policy formulation on procurement procedure, exports & offsets. He is Executive Director & Member of Board, L&T Defence. He is also Founder & Director of Defence Innovators & Industry Association (DIIA). He sits on the Board of L&T MBDA Missile Systems Ltd & is Chairman of the Board of LTH Milcom Pvt. Ltd.